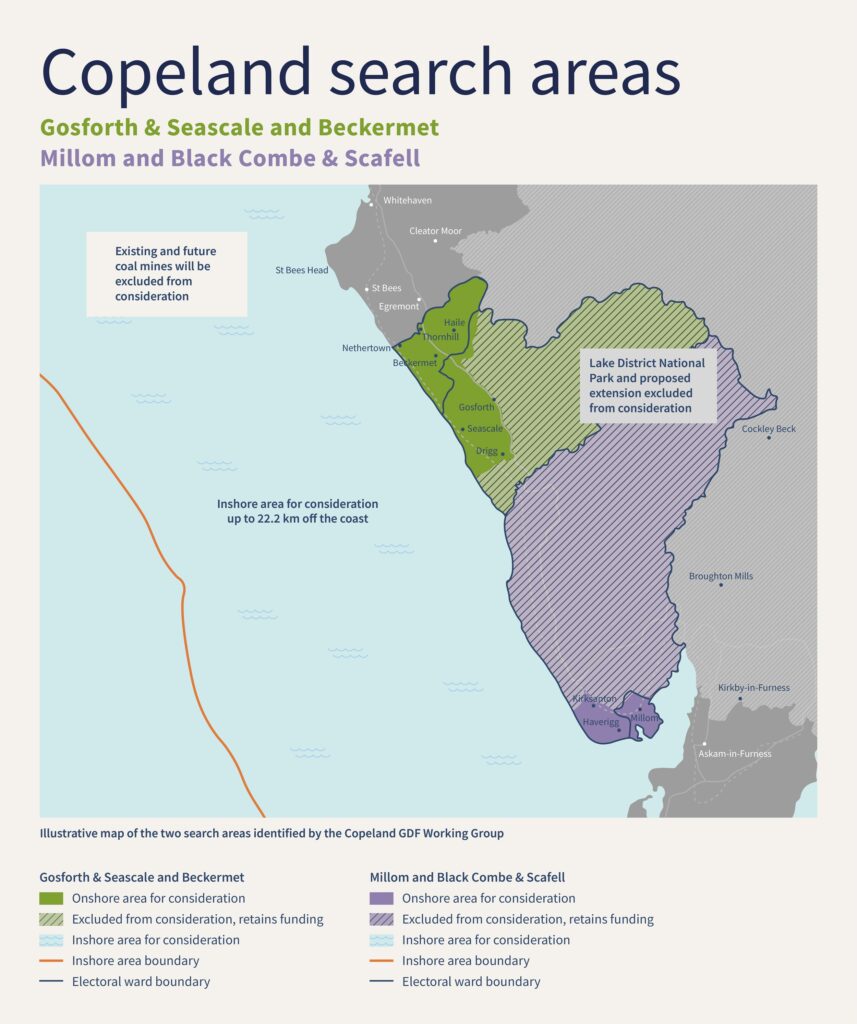 Copeland GDF Working Group has been working towards identifying Search Area(s) for further consideration in the search for suitable sites to host a Geological Disposal Facility (GDF).

A GDF is an underground facility designed to safely and securely dispose of higher activity radioactive waste. A Search Area is the geographical area on land within which Radioactive Waste Management (RWM) would seek to identify potentially suitable sites.

Deep geology beyond the coast is also being considered for the siting of the underground elements of a GDF and the Working Group has recommended that RWM’s initial focus is in this area. This means a surface facility on the coast could provide access to a disposal area deep in the rock beyond the coast, where – based on existing data – the Working Group and RWM understands there may be geology worthy of further detailed investigation.

There are no plans to consider using existing or future coal mines for the geological disposal of radioactive waste, because they will not be suitable.

Mark Cullinan, Chair of the Copeland GDF Working Group, said: “Over the past 11 months we have talked with local people and looked at the data available. The Working Group feels confident that we have selected two Search Areas worthy of further consideration as an initial starting point going forward.

“We are still in the very early part of the GDF journey and it’s up to the local authorities and RWM to now decide whether we progress further to forming Community Partnerships. We look forward to their decision in the coming weeks.”

The Working Group’s identification of the Search Areas has involved looking at readily available information on the local geology, environmental issues, transport infrastructure and safety – as well as information from previous work in the area.

Starting a conversation with local people has been a key activity since the Working Group was formed last November and the views received so far have been used to inform members, alongside other local information.

A Community Partnership is a longer-term group made up of a larger number of people which would take over from the Working Group and consider the possibilities of GDF siting in more detail. Initially the Working Group would start to recruit some community members and then any Partnership would recruit further potential members to join them to take it forward.

Both Search Areas would be considered by RWM to identify potentially suitable sites to host a GDF. A surface facility, which would be the entry point for a GDF, would require up to 1 sq km of land and would require suitable transport links.

The underground part is likely to require anywhere between 10-20 sq km, of suitable geology deep underground. The underground disposal areas do not need to be located directly below the surface site – they could be separated by many kilometres.

Progressing to the formation of Community Partnerships would unlock an initial sum, for each partnership, of up to £1m a year funding for local projects, rising to £2.5m per year if deep borehole investigations to assess geology take place.

Chair Mark Cullinan added: “The work of a Community Partnership – which would involve members of the community, at least one principal local authority and RWM – would include further public engagement and creating a ‘Community Vision’ for the long-term well-being of the community.

“No decision has been taken on any specific locations for a potential GDF. Identifying these Search Areas is a starting point which will allow RWM to initiate investigative works and the Community Partnership to extensively engage with local people over several years.”

Construction of a GDF requires both a suitable site and willing community. If a suitable site is eventually found in Copeland – which could take 10-15 years – a Test of Public Support (such as a poll or referendum that gives people a direct say) would be held with those living in the wards affected. Without public support the project would not go ahead.

If Community Partnerships are formed, residents in these wards will receive information giving further details, and how people can get involved.

Join geological disposal online events – what is it and what’s different this time?